Nowadays phones are not just for calling, it does much more than just calling and messaging and the device which has now become your best companion is called a smartphone. Let’s be honest in it. Smartphone has become an important part of our daily life. It helps everyone right from the beginning of the day by waking up with its alarm. From banking to ticketing, from learning to holding an offer letter, from doing business making dishes, smartphones have no limits. It is your best companion of life without any complaints.

Smartphones are used for various purposes from gaming and surfing to giving examinations. Many people use their entire day and night watching smartphones. So, keeping your eyes safe is very important.

During the day it might be okay but if someone watches or plays on smartphones till late at night in a dark room, he/she needs to lower the light of phones by putting their screen to the dimmer mode or else prolonged watching od smartphone will affect your beautiful eyes. They are several apps one can use as a screen dimmer to protect the eyes. These apps reduce their brightness to ensure that your eyes are safe and making them more comfortable. 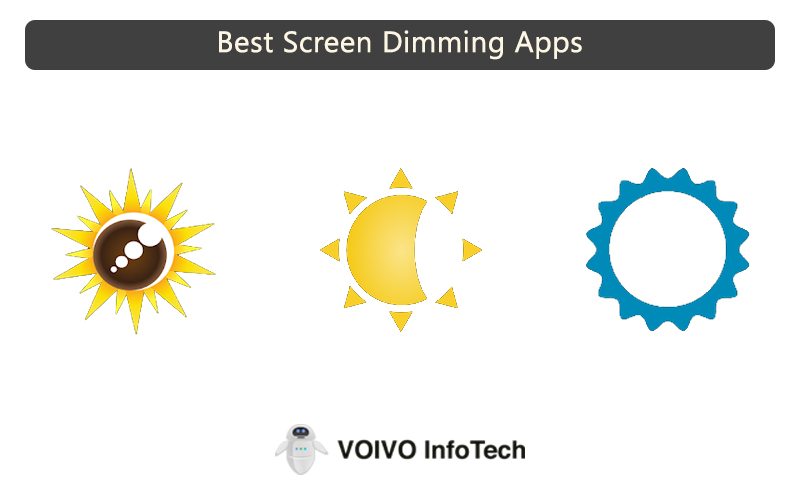 The app helps smartphone users to lower the screen brightness according to their preference just in one touch. You just need one tap to switch it on and one tap to turn it off. When you switch it off the brightness will be back to the earlier shade. Switch the screen dimmer app at night and switch it off in the morning. You can also use it while you are using YouTube and you just need to hear the audio then you can switch the dimmer on and make the screen black. It will also save your battery.

Dimglo is a brightness control app that soothes the user’s eyes from blinding smartphone screens. Dimglo is an ad-free and registration-free app with zero configurations. Now at night, you don’t need to squish your eyes anymore to watch anything from your smartphone as the night mode feature of Dimglo works wonderfully. Your smartphone delivers a blue hue of light from the sunlight which affects your eyes resulting in poor quality of sleep. Diego’s brightness adjusting ability overcomes the effects of a blue hue and gives you quality sleep.

The app is best for eBook reading as your eyes are more stressed during the prolonged reading, lowering the brightness will soothe your eyes. Web browsing and gaming also become safe for your eyes if the brightness adjustment is perfectly done. Users who are finding a straightforward and ad-free application can opt for Dimglo.

Along with great manual and automated management options, Lux lite can also change the hue of your screen so that your phone projects a red light resulting in very less strain on your eyes. The warm hue on your screen will soothe your eyes. There is another mode in lux lite, the astronomer mode. The astronomer mode eliminates the harsh light. Lux lite is a paid app. There is also a free version but the paid options provide more advantages than the free one.

Note: Some of the features are paid

Darker is a unique app in comparison with other screen dimmer apps. The application reduces the brightness to deficient levels to prevent eye strain during the night. The app automatically starts after restarting the phone. It has a built-in color filter so that the user can adjust the colour of their screen and lower its intensity. It filters out the eye-dazzling harsh lights at night.

If the screen of your smartphone appears very bright even on the lowest brightness setting then EasyEyes can be the perfect screen dimming app for you. EasyEyes is one of the top-rated screen dimmer apps for Android users. The app gives its viewers a warm look rather than the eye-dazzling blue gaze that displays during the night.

The app reduces the strain of your eyes by changing the phone’s colour temperature from white or blue to warm. Warm hue is a natural light source and it helps your body to produce melatonin which ultimately gives you better sleep. With Easyeyes your phone watching experience will be eye-soothing and easy even at night. The app was built in such a way that it could run without any setup while providing the users with maximum control.

A blue light filter is an app that turns your sleepless nights to sound sleep nights. Yes, this app is for those people who have trouble sleeping after watching the screen of their phone for long hours. Almost every person has to go through the difficulty of sleeping after watching the phone screen. It happens because of the blue light that is displayed on the phone screen.

Scientific studies have revealed that much exposure to blue light can be a serious threat to retinal neurons and prevents the secretion of melatonin which results in poor sleep. However, it is proven that the reduction of blue light can improve sleep to a great extent. So, the blue light is harmful both for your eyes and sleep and the Blue light filter helps you to reduce the blue light by bringing the screen to natural color. After using a blue light filter for some days one can surely see its effects.

CF Lumen is one of the top-rated screen dimmer and eye care apps. The best feature of CF Lumen is that it automatically adapts the colour of your android device based on the sun’s position or the custom configuration. If you set the app on the default setting the screen of your phone will show a warmer tint after the sunsets which reduce your eye strain to a huge level.

The blue light which your display emits keeps your brain awake, whereas the warmer temperature eliminates the blue light. Switching on the night mode will reduce the blue light and as a result, your brain will give less effort to be awake. The red filter is used as default during sleeping hours because red soothes your eyes the most and strains the least. The light sensor in the app is used to adjust the colour automatically.

Android phones don’t provide anything more than the basic brightness control settings. At night the dimmest level of android phones can light the entire room. When it can fill the whole corner of the room with light just think how will it affect your eyes when you are holding the phone just a few centimetres away from your eyes for a prolonged period. So much light will harm your eyes after a while. Eye pains and headaches are the results of watching a phone for so long period. The reduction of blue light is important for your eyes. It will strain your eyes to a minimum.

Fortunately, many apps have been launched in few years to get rid of this issue. Blue Light filter Apps or Screen Dimming Apps are for the purpose to reduce the blue light effect on your phone resulting in fewer strains on your eyes. The above-mentioned apps are best for reducing the harmful blue lights to give you better sleep and reduce your eye strains.

1. Is there any to dim your screen?

There are numerous apps to dim your screen light. The best screen dimming apps are mentioned above with brief discussion and their features.

2. Do screen dimming apps save battery?

When the brightness of the light is decreased it means less power consumption. Hence having lower screen brightness than a normal brightness will reduce battery usage more than normal.

3. Are the warmer colours better for the eyes?

It’s best if you use a warmer colour temperature on your phone screen in dark rooms.

Warmer colour soothes your eyes and gives less strain to your eyes.

4. Why should dark mode be used?

Dark mode reduces eye strain. There is another advantage of dark mode that is when it is turned on the battery usage goes down.

5. What brightness setting is best for your eyes?